A young lady from Aboh Mbaise, Imo State, who lives in Umuahia Abia State capital and goes by the name Mrs. Zazi David, is cooling her head off in the police cell after she allegedly attacked her 10-year-old maid with hot water mixed with ground pepper, leaving the skin of the kid peeled off.

It was a bizarre scene as the child, who could not seat or lie down because of the wounds, writhe in agony over the astounding attacks by her madam at the police station. According to reports, the 10-year-old maid whose name was given as Ifunanya, lives with her madam at a housing estate behind Saclux Paint off Aba Road, in Umuahia

Informed sources, Mrs. Zazi David, whose husband is in South Africa had been regularly abusing the child; inflicting wounds on her young skin, resulting in series of scars on her body. The latest occurred last Sunday when she (Zazi David) doused her victim with hot water boiled at 100 c degree centigrade with pepper.

The source said “her body radiates like a kaleidoscope”, adding “It seems that she (Mrs. Zazi) has been scourging the child for sometime before finally dousing her with the hot water”.. 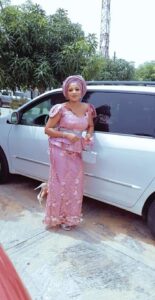 In her Facebook page, she claims to be an entrepreneur and “CEO of an Entertainment outfit”, a claim that could not be ascertained.

“The cat was let out of the bag last week Sunday when the suspect forced the little girl to drink boiling hot water with pepper. This time, the horrendous attack burnt the little girl’s lips, her mouth, throat, voice box as well as esophagi, thus making it difficult for the girl to even breathe’, our Reporter was told

However, following the decision of the patent medicine dealer to spill the bean, Mrs. Zazi allegedly threatened him, promising to “deal with him” thereafter.

The Police Public Relations Officer in of Abia State Police Command, Geoffrey Ogbonna, a Superintendent of Police, confirmed the story and assured that the suspect will be prosecuted as soon as the police conclude their investigations on the matter.

Our investigations reveal that the suspect is using many unorthodox means to buy freedom and as our source puts it “she has also been pulling all kinds of strings to get herself off the hook”, but the police authorities in Abia, human civil rights advocates and the state government have sworn to to0 see to the end of the matter, adding that she will face the law.

“Right now, the girl cannot speak or eat without suffering excruciating pain but can only consume fluids that are forced gently down her throat as her throat has become too narrow from the burns.

She indeed needs extensive surgery if she is to speak well or eat normally again, our Reporter observed.

Uche Nwosu is a two time Shell Petroleum PLC award winner in the year 2000; He won the Shell Award on Investigative Journalism and Environmental Cleanliness.