A Turkey-based Nigerian man is reportedly set to divorce his wife after DNA test result revealed he’s not the biological father of their second son.

According to a Twitter user @igwehachebe, the wife is an Abuja based medical doctor and was dating a married man before she got married to her husband.

It’s said that their son looked exactly like the wife’s married lover, which made the man suspicious, so had a DNA test done on the boy.

However, when the result came back, his suspicions were confirmed as he discovered that he’s not the biological father of his supposed son.

The boy reportedly belongs to the married man the wife was dating before she got hitched to her husband.

“A friend of mine who came back from Turkey married a medical doctor based in Abuja. The girl was dating a married man before getting married. Well her second son looked exactly like the man she was dating before marriage and DNA just confirmed it. We will file divorce papers tomorrow.” 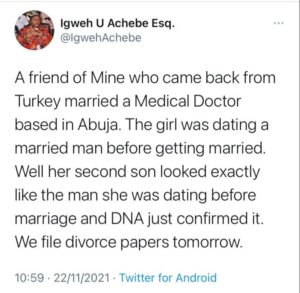