A Nigerian man has been praised on Twitter after he gifted a new tricycle popularly known as Keke NAPEP to the motorcycle rider who used to convey him during his days as an undergraduate.

According to the Nigerian man @ManLikeChisom, the motorcycle rider would sometimes convey him when he had no money or would carry him on credit. To repay him for his kind gesture, Chisom decided to purchase the tricycle for him. 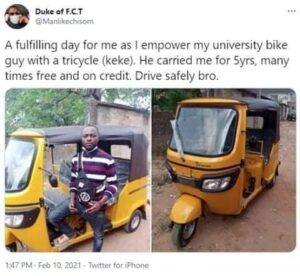 ”A fulfilling day for me as I empower my university bike guy with a tricycle (keke). He carried me for 5yrs, many times free and on credit. Drive safely bro.”