A man by name ‘Okosisi Aguleri’ has reportedly died while having sex with a woman believed to be his wife. 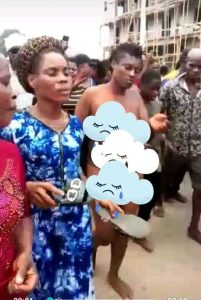 Angry villagers are accusing the woman of being responsible for the man’s death and have humiliated her by leaving her naked outside the compound where this occurred.

Without any post-mortem, the men have already concluded that the woman is responsible. This highlights once more the plight of women in rural Africa.