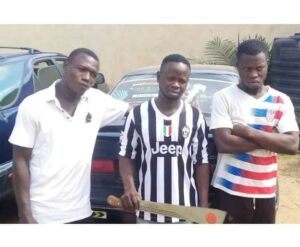 Oluwaseun was accused of mobilizing the other two suspects and invaded the school with an unregistered vehicle, armed with brand new cutlass and threatening to hack the teacher whom he accused of beating his 15-year-old daughter.

It was gathered that while teaching, some of the students including the suspect’s daughter were mocking the teacher and distracting other students. This prompted the teacher to identify those who were disturbing the class and flogged them as a corrective measure. However, the suspect’s daughter went home and reported to her father, who then mobilized two thugs and stormed the school with cutlasses.

The state Commissioner of Police, CP Lanre Bankole, has ordered that the suspects be properly investigated and charged to court as soon as possible.