MAN 30, KILLS COUSIN FOR SLEEPING WITH HIS WIFE Posted by News Mirror, February 25, 2022

Thirty-year-old Tambaya Usman has killed his 28- year- old cousin, Umar Musa, for sleeping with his wife in Jaguwa community in the Rafi local government area of Niger State. 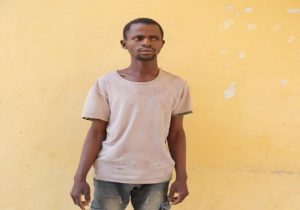 Usman confessed to catching his 22-year-old wife, Hajo Gambo Tambaya, having sexual intercourse with the deceased on their matrimonial bed.

He said he angrily cut the head of the deceased with a machete.

Tambaya said he attacked the deceased before it was not the first time he had caught him with his wife.

“I was angry that he was still sleeping with my wife even after he had been warned several times.

“When he was caught before, he apologised for the act and promised never to engage in such misdeed again but to my surprise, he did it again. I did not mean to kill him. I only wanted to injure him,” he stated while being paraded by the police.

He said that during interrogation, the suspect confessed to the crime with the claim that he caught the deceased sleeping with his wife.

Abiodun said that the suspect has been arraigned in court for prosecution.