Nnamdi Kanu, leader of the Indigenous People of Biafra (IPOB), on Thursday asked his followers to “maintain order according to hierarchy”. 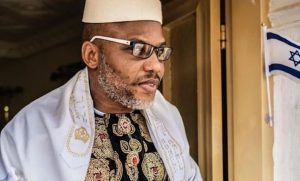 Newsmirrorng.com reports that since Kanu’s rearrest in June 2021 and subsequent detention by Nigerian authorities, the Directorate of States (DoS) of IPOB headed by diaspora-based Chika Edoziem, has been running the affairs of the group. The DoS has clashed with a number of Kanu’s supporters in the course of their administration of IPOB affairs.

Kanu’s family and his team of lawyers have access to him in the custody of the Department of State Services (DSS) where he is being held following his arrest in Kenya eight months ago. Binta Nyako, a judge of the Federal High Court in Abuja had said Kanu should be allowed to meet his lawyers and family members twice a week – Mondays and Thursdays.

“Just finished seeing leader of the Indigenous people of Biafra, Mazi Nnamdi Kanu,at the department of state security services Abuja. He received us with a broad smile and we had very meaningful discussions. He urged us to remain focused and maintain order according to hierarchy. Principle and accountability were his key words,” Emmanuel wrote on his social media account.

Nnamdi Okwu Kanu is a British-Nigerian political activist who pushes for the secession and independence of Biafra from Nigeria. The main aim of his group, IPOB, is to create the separatist state of Biafra which they fought for in Nigeria’s Eastern Region during the country’s Civil War of 1967–1970.