A court in Edo State has ruled that a maid, who killed the mother of ex-governor of the state, will die by hanging. 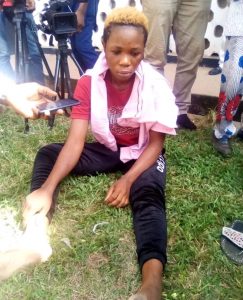 The High Court declared on Monday that Dominion Okoro, 25, who killed Madam Maria Oredola Igbinedion, mother of Chief Lucky Igbinedion, on December 1, 2021, would be hanged by the neck until certified dead.

Okoro murdered her boss with a stool, with the intent of robbing her of N100,000, at her residence in Ugbor, Benin City.

Justice Efe Ikponmwoba held that the convict, after killing Madam Igbinedion at midnight, used cotton wool to block her nostrils, while she called a cab man, who assisted her to escape from the house early the following morning.

The convict confessed that she bought Indian hemp, which she used in preparing a meal for the elderly woman, in order to weaken her and eliminate struggle before death.

The presiding judge held that with the evidence of the pathologist on the cause of death, evidence of other prosecution witnesses and the convict’s confessional statement, it was safe for the court to send the convict to the gallows.

The convict’s sister, Patience Okoro, was discharged and acquitted after being charged for being an accessory after the fact.

After killing Madam Igbinedion, Dominion had called Patience on the phone to inform her of the act.

The state police command gave its officials a pat on the back for “ensuring a thorough investigations and diligent prosecution”.