They golden descendants of Uzor Kalu dynasty. Gold they always say is very precious. So they great descendants of Uzor Kalu dynasty are gold and they are precious. The history of Abia politics can never be complete without making reference to the great expolits of Senator Orji Uzor Kalu the Senate Chief Whip (Miri yiri Enyi ala Igbo). The same trend follows with the indefatigable Mascot Uzor Kalu. The unassailable achievements of the people’s Senator Orji Uzor Kalu meritoriously earned him the accolade Action Governor by the former President Olusegun Obasanjo, remarkably because of the speed construction of the Aba- Owerri Road Aba. 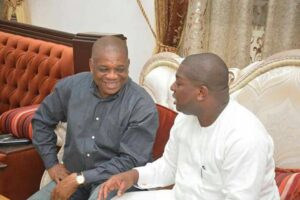 There is no point overstretching issues. The spirit of love, generosity and kind-heartedness runs on the DNA of the tried, tested and trusted political heavyweights.

The indispensability of the Orji’s human capital development can’t be putting into negligence. In politics they are an institution. The Kaluism political ideology reigns supreme in all the political sphere of life.

The two political bulldozers are seasoned Philanthropists whose heart of Gold and hands of milk follows like the great Pacific ocean, they activities of foundations founded by the Political pillars have stopped at nothing in ameliorating the pains and sufferings of the less privileged.

We can not forget the galvanizing force of the both men in making sure that the APC in Abia gains it’s dreamed height and it is on record that such strategies are yielding the positive results which all and sundry can testify.

Of course, Political Marauders and detractors must always play their part of unfruithful show of shame but those that puts their trust in God are like Mountain Zion. The Kalus are men with God’s grace and no human being can defame them. The grace and unction of the Holy Spirit they have will always Disgrace the political Marauders.

What else can I say except, the great Pillars continue doing good. The hand of God is always upon you. I pray that God will replenish you people in a million fold.

chances of problems with cialis Viawn