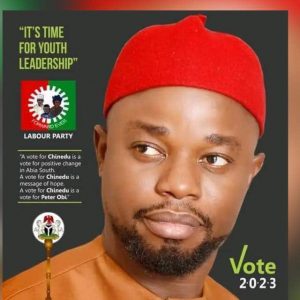 In a series of tweets, the well accomplished professional in the field of business and international corporate world noted that is time for Abia South Senatorial Zone citizens should take a study of global best practices legislators adopt that have direct impact on the citizens they represent and demand effective good leadership and representation.

He noted that a lot of good and direct benefits economically, heath and wellbeing, infrastructure and leadership can be delivered to people of Abia South Senatorial Zone if they choose wisely a youthful representative in the red chambers.

Although Abia South has the biggest skill acquisition center in the country, has great population of youths with drive on entrepreneur which will empower millions in the zone if the right leadership is in government to attract these benefits to the zone.

He equally noted that is obvious that the past representatives both in legislature and executive (16 & 8 years respectively ) have been selfish and self-centered to their immediate up keeps at the detriment of the masses that elected them.
He promised that if elected, the masses should hold him accountable and he knows how to solve the problems of the zone through legislative means.

As global consultant to governments especially in Africa, he understands first hand the message and knows how to attract the right policies and investments that will turn around the major economic hub of Nigeria Aba into the light of the country.

As stated by our presidential candidate, “Nigerians should take a cue from global governance best practices; grasp what people-oriented leadership is all about and rise up for effective change. – PO”

Chinedu Onyeizu will certainly work with our Peter Obi and Ahmed Yusuf presidency to make things work for Abia South Senatorial Zone when elected into office.

A vote for Chinedu Onyeizu is a vote for Peter Obi and Labour Party.