Three alleged armed robbery suspects today met their Waterloo as they were burned to death by irate youths in Aba, the commercial city of Abia State. The three daredevils were said to be the ones terrorising Afor-ule, Umuimo and Kamalu streets in Osisioma axis of Aba. One of the armed robbers set ablaze at UBA Bank junction behind Rufus Obi Chemist They were caught up by irate youths after their successful operation around the axis on Sunday. 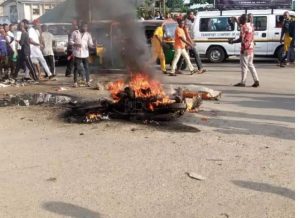 According to eyewitness reports, the men who operate with Tricycle/Motorcycle were knocked down by a moving vehicle while fleeing from the police. The three armed robbers were separately set ablaze, one at opposite UBA Bank, others were burned at Union Bank junction and Star Paper Mill by Kamalu street Aba.
As at the time of this report, Police have taken over the scene as people gathered to take a look and thereby causing traffic gridlock in the ever busy Aba Owerri road.

There has been several reports of armed robbery around the aforementioned streets lately, the men who operate with motorcycle specializes in snatching of Tricycle (Keke Napep), robbing POS operators and Stealing from residents. Their operation, has pushed people to desert the area at night as residents and traders closed their shops early to avoid being robbed.