A report from the Federal capital territory has it that Gunmen have allegedly kidnapped an Abuja-based officer of the Naval Headquarters in Abuja, Musa Lawal. 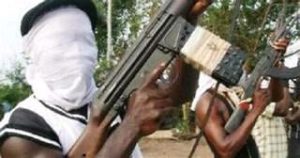 The victim, with enlistment no. X12775 ABRP3, was whisked away by his abductors in Kogi State.

It was gathered that some heavily armed men numbering five invaded his residence located behind Post Flood Housing Estate, Lokoja on Monday night and whisked him away.

During the attack, his car was destroyed by the suspected kidnappers as they forcefully gained entrance into his residence.

Before the unfortunate incident, the naval staff was to depart for his station on Tuesday morning before he was kidnapped.

According to the wife of the kidnapped naval officer, Mrs Juliana Musa, the kidnappers reached out to the family an hour after her husband was kidnap, demanding N3 million.

Mrs Musa narrated that her husband had one of his hands injured and was forcefully taken away while bleeding.

Ayah stated that the police in collaboration with the navy are presently combing the bush to rescue the officer from the abductors.