Former Governor Rabiu Musa Kwankwaso and present Governor Umar Abdullahi Ganduje of Kano State might have agreed to sheath their swords as the duo met in Abuja in a reconciliation meeting said to have been presided over by two Governors of the All Progressive Congress (APC). The meeting, which was said to be at the instance of a governor from the North and another from the Southeast, was held at the Asokoro Kano State Governor’s Lodge on Wednesday night with the Caretaker Chairman of the APC, Mai Mala Buni in attendance. 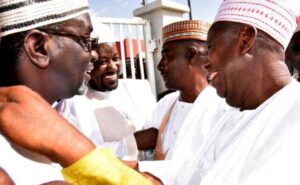 According to reports Senator Rabiu Musa Kwankwaso agreed to reconcile with his successor Ganduje and even help him conclude the last lap of his eight-year administration, provided Ganduje agreed to some stipulated terms set by the former Governor Kwankwaso. Similarly, part of the meeting was said to be smoothing the way for the decampment of Senator Kwankwaso from the opposition Peoples Democratic Party (PDP) to the APC, before the end of this year. However, Kwankwaso’s willingness to decamp to the APC might not be unconnected with the fact that he has no political future in PDP.

The rivalry between Governor Ganduje and Kwankwaso started immediately after the 2015 general elections, when Ganduje begin sacking Kwankwaso loyalists from his government, which prompted the former governor to leave the APC for the PDP in 2016.