There was panic in Imo State on Tuesday morning after gunmen and security operatives clashed at Mgbidi and Akata in the Oru West Local Government Area of the state.

Villagers said the heavy shootout in the areas caused residents to flee their homes and business outlets. 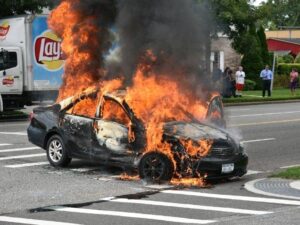 Sources in the area told our correspondent that the incident began as early as 6am when the hoodlums allegedly enforcing the partial lockdown order of the Indigenous People of Biafra barricaded the roads, ordering people to go back to their houses.

The development attracted the presence of security men in the area which led to a gun duel.

While it had not been confirmed if there was any casualty as of the time of filing this report, it was reported that some cars were burnt during the crossfire.

One of the sources said, “Hoodlums and gunmen are engaging each other in a crossfire. Our people, especially those of them at Mgbidi are on the run. Some cars were set ablaze.”

IPOB had on Monday urged people in the South East to pray fervently for peace in the zone, unconditional release of Nnamdi Kanu, and restoration of a Biafra nation.

Although a statement by the spokesperson for the group, Emma Powerful, did not order a sit-at-home, it urged the people to lock up their shops temporarily during the duration of the prayers and open shortly after.

When contacted, the police spokesperson for the command, Mike Abattam, promised to inquire and get back to our correspondent on the issue but he had yet to do so as of the time of filing this report.