Bamise Ayanwola, a 22-year-old lady, who was declared missing last week after boarding a Bus Rapid Transit (BRT) vehicle from the Ajah area of Lagos to Oshodi, has been found dead. 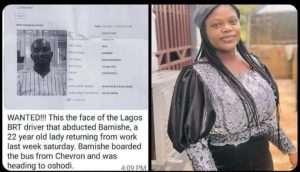 A relative of the victim confirmed the development on Monday afternoon.

“We are at the morgue. We have confirmed the corpse. An autopsy will be carried out to confirm if any part of her body is missing,” he said.

The young lady went missing on February 26 after she boarded a BRT bus with number 240257 heading to Oshodi at about 7:30 pm to see her sister-in-law, who was said to be in labour.

The fashion designer was said to have become suspicious when the driver of the bus told her to sit at the back despite being the only one in the vehicle.

The driver, Nice Andrew Omininikoron, has now been arrested, police said moments ago.