Dr. Ngozi Okonjo-Iweala has been named Forbes Africa Person of the Year 2020. Okonjo-Iweala, Nigeria’s first female minister of finance and the prime candidate for the office of the director-general of the World Trade Organisation, joins a list of eminent Africans to have received the award. 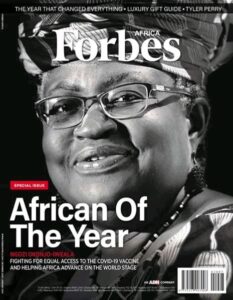 In 2019, Akinwumi Adesina, President of the African Development Bank (AfDB), won the award for his outstanding work at the bank and a sterling career in agriculture and finance.

Paul Kagame of Rwanda won the same award in 2018. Other eminent Nigerians to have bagged the award are Muhammad Sanusi II (2013), former governor of the Central Bank of Nigeria; Aliko Dangote (2014), president of the Dangote Group.

Expect more as we await her emergence as the Director – General of World Trade Organisation (WTO).

OPAS FEDAS The begining of an unending tale By Uche Njionye