Jonathan Is Buhari’s Candidate As Other Aspirants Grumble, Buhari Jets Out Of Nigeria

Some presidential aspirants contesting on the platform of the ruling All Progressives Congress (APC) have kicked against the decision of the Aso Rock cabal to adopt former President Goodluck Jonathan as the presidential consensus candidate of the party, SaharaReporters has gathered. 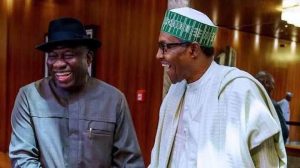 The cabal, comprising some members of President Muhammadu Buhari’s extended family and friends, are the powers behind the throne.

The group led by Buhari’s nephew, Mallam Mamman Daura is said to have the ear of the President. It also influences policy-making and determines those who get major appointments.

The consensus method will entail President Buhari anointing him, while other aspirants will step down as it was done during the March 26 national convention of the APC, which produced Senator Abdullahi Adamu as the chairman of the party

“Almost all the aspirants including Tinubu, Osinbajo, and Amaechi are pretty unsettled over the decision of the cabal. It’s unfortunate,”

President Muhammadu Buhari has departed Abuja for the capital of Equatorial Guinea, Malabo, where he will take part in the African Union (AU) Extra-ordinary Session of Assembly of Heads of State and Government.

The First Lady, Mrs Aisha Buhari, who is the President of African First Ladies Peace Mission, is accompanying her husband to the African Union meeting.

“The three-day summit, which will hold on May 26th-28th, will also focus on Humanitarian Challenges in Africa, with related issues on migration, refugees, returnees and Internally Displaced Persons.