The Indigenous People of Biafra (IPOB) has revealed that over 500 of its members arrested by the military in the south east are currently languishing at various Kaduna camps. 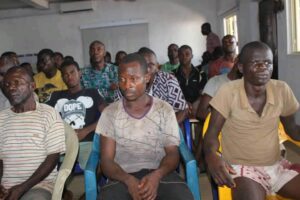 In a statement by the spokesperson of the group, Comrade Emma Powerful, it said “Biafrans with any case of missing family member, to go to Kaduna State and check if they could be found there.

“We gathered that some of those abducted from Obigbo in Rivers State last year as well as some of the Biafrans being abducted in Imo State are also in various secret detention cells in Kaduna.” Powerful said.

Given account of the details of those arrested he said “It has come to the knowledge of IPOB that about 95 innocent citizens of Obigbo were discovered in Kaduna, 257 others kidnapped from Orlu Imo State.

“Members of the public are also invited to go and check their missing ones in different Army detention centres in Abuja.

“IPOB intelligence unit will not relent in the efforts towards unravelling the various secret cells and detention facilities where our people are hidden and locked up to rot away.

“We therefore, put the world on notice of the fresh discovery of 95 abducted Obigbo and Orlu residents including six females and 89 males in Kaduna Prisons and secret cells in Abuja. We discovered newly Army abductees, including one Ugochukwu, who we discovered died as a result of severe torture. Over 257 others are still missing till today. He alleged.