The Senator Representing Kogi West Senatorial District on the platform of the All Progressives Congress (APC) in the National Assembly (NASS), Senator Smart Adeyemi has said supporters of President Muhammadu Buhari cannot keep quiet over the security situation of the country. 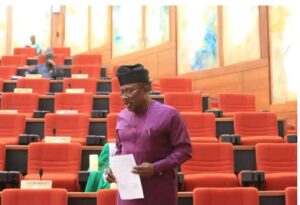 Senator Adeyemi stated this on Tuesday, while debating a motion moved by Senator Sani Musa on the activities of bandits and Boko Haram terrorists in Shiroro and Rafi Local Government Areas of Niger State.

He described the present situation of the country as worse than the civil war, and that President Buhari must rise to the occasion and bring in people to save the country or else, Adeyemi said, everyone would be consumed.

“Insecurity is a serious problem today in Nigeria and there comes a time we cannot but speak the truth. Today, all of us have been threatened. We need not run away from the fact that this is the worst instability we are facing.

“In fact, this is worse than the civil war. The answer is very simple. We cannot pretend that we are capable of confronting the issues we are facing. Let us shout and call for foreign support.

“The President should get to know that we as supporters can no longer keep quiet. The nation is on fire. The President must rise to the occasion and bring in people to save this country or else we will be consumed. We cannot keep quiet any longer.

“It has gotten to a situation that we cannot sleep with our two eyes closed. Our security system has collapsed and because it has failed we need to look for foreign support.

“The President must know that this is a bad time for our nation. Let us shut down this National Assembly if we cannot save this country,” the Kogi Senator said.

Contributing to the motion, the APC Senator representing Osun Central, Senator Ajibola Basiru, who is also Spokesperson of the Nigeria Senate, said the Nigeria Police Force (NPF) is incapable of securing the country as it is.

Senator Basiru, who is also Chairman, Senate Committee on Media and Public Affairs, argued that there was need to recruit at least five thousand security personnel in each state of the federation.

“As at today the @PoliceNG is incapable of securing the country. It is also important that we need to come up with a martial plan to address this issue of insecurity in Nigeria.

“And in minimum, we need to recruit at least five thousand security personnel in each state. We should stop lamenting as a National Assembly and take actions,” he said.

Meanwhile, citing Order 42 and 52, seeking the leave of the Senate, and presenting the motion, Senator Musa lamented the activities of bandits and Boko Haram terrorists in Shiroro and Rafi Local Government Areas of Niger State, which he said has taken a dangerous dimension.

“This issue is not just Niger, it is all over the country. My observation is what is so wrong in our system that makes us not to respect early warning signals?

“In the last 10 years there have been several reports that has given us indications that Nigeria may be entering into the situation that we are describing now. Fundamentally, what are we doing wrongly that will make us to ignore warning signals?

“That is where my concern is. We need to have a private session with the Commander in Chief of the Armed Forces of this country to find a lasting solution to this huge national embarrassment.

“What we are witnessing is internal insurrection that is snowballing into the case of a war,” Senator Olubunmi Adetunmbi said.

Meanwhile, on his part, Senator Gabriel Suswam said: “The Executive has shown clear incompetence of handling this security issue. Let us do the needful. Let us seriously sit down with Mr. President as a house to show the seriousness of what we have found ourselves in.

“Otherwise we will just find people who will overwhelm us here. Gradually people are getting very impatient. The motion moved by our colleague here is about the fourth time he has moved such a motion.

“Let us have an Executive Session and frankly discuss this thing so that we can frankly talk and come up with solutions so that we can save Nigeria”.

Also, Senator Biodun Olujimi said: “I believe we are all tired coming here to talk about insecurity, kidnapping and all the sort. We are where we must now bring out all our arsenals and use on insecurity. There is no political will to handle insecurity.

“We must know what government wants to do about insecurity and this Senate must insist and find out what they want to do”.

However, Senator Seriake Dickson blamed the issues bewildering the nation on a faulty constitutional structure, stressing that the challenge the nation is faced with is a challenge of leadership.

He said: “I am impressed that we are looking at issues passionately as we ought to. Right now, there is also loss of fate in the Nigeria dream, project and vision.

“This is why some of us including myself have taken the position that all these issues that are bewildering us is a product of the faulty constitutional structure. How can one man comfortably sit down in Abuja & police our nation of about 200 million people?

“We are about to lose the Nigeria dream and we should not let that happen. The challenge is the challenge of leadership. Everyone must rise to the occasion.

“Mr. President should rise and take leadership and do what he has to do including leading in the area of fundamental constitutional reform”.