Scores of terrorists suspected to be members of the dreaded Boko Haram were on Saturday night killed by the soldiers attached to the military cantonment in New Bussa, Borgu local government of Niger state. 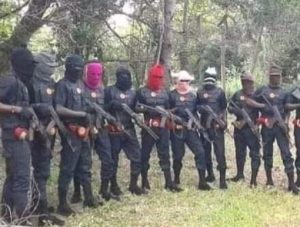 The terrorists in the numbers were said to have invaded the military base situated in Wawa town in the Borgu local government area but met a stiff resistance from the soldiers, leading to the killing of eight of the Terrorists while scores were injured.

The commander of the terrorists was said to be among those arrested by the combined team of Soldiers and air force personnel after a fierce gun battle.

Although there is no official confirmation of the attack as at the time of filling this report, a local source from Wawa community said the terrorist group tried to forcefully gain entry into the military base in an attempt to secure the release of some of their members who were being detained in the military base.
According to the local source, the heavily armed terrorists came into the town in large numbers and started shooting sporadically to scare the military men in the base.

However the battle ready soldiers successfully countered the terrorists’ onslaught and in the process eight of them were neutralized.

It was also learnt that the soldiers however secured the services of their colleagues in the air force who were said to have deployed Tucano fighter jets to wipe out the terrorists.

“Some soldiers were injured but no one died”, the local source said, adding that “everybody is living in fear right now”.

However as at the time of this report there was still panic in the town though the security situation was said to be returning to normal.

The public according to a report have been advised to remain indoors till further notice.
No official of government was available to confirm the story but a top traditional title holder in the Wawa emirate who preferred anonymity confirmed the attack, saying that “yes it happened, the situation was terrible but the soldiers tried.”

This latest attack on the military base in Wawa is coming barely one year after Terrorists invaded the palace of the District Head of Wawa, Dr. Mahmud Ahmed Aliyu and abducted him.
He was however released after about one month in captivity, and after some ransom was paid.