Lawyers of the detained leader of the Indigenous People of Biafra (IPOB), Nnamdi Kanu, have asked the Attorney General of the Federation and Minister of Justice, Abubakar Malami, SAN, to immediately and unconditionally order his release from the custody of the Department of State Service (DSS), in compliance with the judgment of the Court of Appeal. 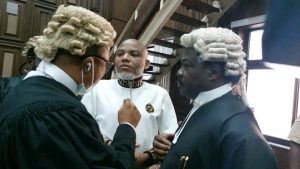 A similar request has equally been made to the Director General, Department of State Security Service (DSS).

In two separate letters dated October 17 and addressed to the AGF, and the Director General, Department of State Security Service Chief Mike Ozekhome(SAN), lead counsel to Nnamdi Kanu drew their attention to the fact that the IPOB leader is being illegally held in solitary confinement in State Security Service facility, at the Abuja Headquarters. 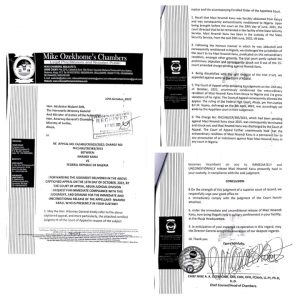 The letter said on the strength of the judgment of the Court of Appeal, the AGF should use his good office to immediately comply with it. 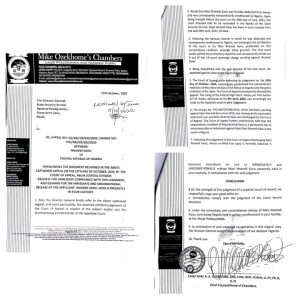 Between: Nnamdi Kanu Vs Federal Republic of Nigeria” reads in part:

“Recall that Mazi Nnamdi Kanu was forcibly abducted from Kenya and was consequently extraordinarily renditioned to Nigeria. Upon being brought before the court on the 29th day of June 2021, the court directed that he be remanded in the facility of the State Security Service. Mazi Nnamdi Kanu has been in the custody of the State Security Service, from the said 29th June 2022, till date.

“Following the heinous manner in which he was abducted and consequently renditioned to Nigeria, we challenged the jurisdiction of the court to try Mazi Nnamdi Kanu, predicated on this extraordinary rendition, amongst other grounds. The trial court partly upheld the preliminary objection and consequently struck out 8 out of the 15-count amended charge pending against Nnamdi Kanu.

“Being dissatisfied with the said decision of the trial court, we appealed against same to the Court of Appeal.

“The Court of Appeal, while delivering its judgement on the 13th day of October 2022, unanimously condemned the extraordinary rendition of Mazi Nnamdi Kanu from Kenya to Nigeria and the gross violations of his rights. The Court of Appeal consequently allowed the appeal. The ruling of the Federal High Court, Abuja, per Hon Justice BFM. Nyako, delivered on the 8th of April 2022, was accordingly set aside by the Appellate court in their Judgement.

“Following the judgement of the Court of Appeal discharging Mazi Nnamdi Kanu, whose certified true copy is herewith attached, it becomes incumbent on you to immediately and unconditionally release Mazi Nnamdi Kanu presently held in the State Security Service custody, in compliance with the said judgment.”

Meanwhile, it is the position of Kanu’s legal team that the Court of Appeal judgment has completely buried the “frivolous criminal charge against Kanu and totally prohibited the Federal Government from coming up with any criminal charge or indictment against Nnamdi Kanu.

According to Ifeanyi Ejiofor, the lead judgment of the Court of Appeal by Justice Oludotun Adefope- Okojie, is more satisfying and sacrosanct.

“It is the last straw that broke the camel’s back, a boil in the scrotum and can never be circumvented. There is no escape route for the oppressors here! The portion of the lead judgment in reference reads:

“The consequence of this section, I hold, is that the Appellant is prohibited from being detained, tried, or otherwise dealt with in Nigeria for or in respect of any offence allegedly committed by him before his extraordinary rendition to Nigeria. The Lower Court has no jurisdiction, I further hold, to try the Appellant on counts 1, 2, 3, 4, 5, 8 and 15 which were retained by it, being charges allegedly committed by the Appellant prior to his extraordinary rendition.

“In addition, by the forcible abduction and extraordinary rendition of the Appellant from Kenya to this country on the 27th day of June 2021, in violation of international and state laws, the Lower Court and indeed any Court in this country is divested of jurisdiction to entertain charges against the Appellant and I so hold.” (Daily Sun)

•letter written by the Lawyers of the detained leader of the Indigenous People of Biafra (IPOB), Nnamdi Kanu, addressed to the AGF, and the Director General, Department of State Security Service Chief Mike Ozekhome(SAN).