Ngwa Road? Old Aba men would remember their Ngwa Road with some mixed nostalgia. This was a household name, a place of fairy tales where men stucked few pennies into their pockets and went to work after working hours. It was a place that accommodated the fallen nature of man, where carnal instincts took pre-eminence over the spiritual, where morality was outlawed. 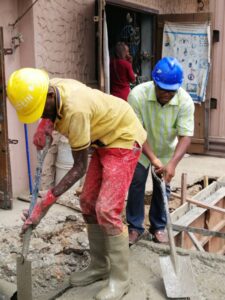 Ngwa Road! Here, men went to work to seek for fun and pleasure and wives lost their husbands to Ngwa Road. Youths, with hot blood in their veins, gathered few pennies and went to work to become men. It was the vogue of the day. This was when men were men. Ask De-Okey Ugboaja.

But, there is a departure. Men are currently at work in Ngwa Road but not for your familiar, old-time work that men of yester-years did after working hours – the popular part-time work with old women, retiring from the oldest profession. The saying was that: akwara nkawaka eziga ya Ngwa Road. (When a whore becomes old, she’s sent to stay and hibernate at Ngwa Road). Thus, Ngwa Road earned the social construct of being the home of Aba old women brand of sex workers. And men went to work at Ngwa Road. “It is true. This place became a sprawling ghetto, Aba’s version of Ajegunle in Lagos, and a Centre for sex trade, ” declared His Royal Highness, Eze Sunday David Emejiaka, Osimiri the third of Ohazu Ancient Kingdom. 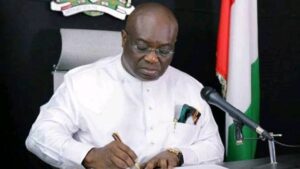 Today, Governor Okezie Ikpeazu’s men are doing a different kind of work, a work of cement and concrete, not your usual open and close – money for hand, back for ground. Ikpeazu’s cranes, bulldozers and caterpillars are at work at Ngwa Road. Governor Ikpeazu has come to change the narrative. Ngwa Road is one of the roads that have remained impassable for over twenty years. It belonged to the lamentation of the Aba meltdown, the Aba song of decay. But, the time of cleansing has come!

“The area had the largest concentration of people living below the poverty line. You could see seven to eight people living in one room. The place was, and is still is, a melting pot of human activities. But it was abandoned for over twenty years now,” a highly elated Eze Emejiaka declared.

Today, happily, Governor Ikpeazu’s men are working under Heartland Civil Engineering Limited to reconstruct the boundary road. Massive construction work is in progress. A big and solid drainage line is being constructed from the west end into the Aba River. The bulldozers are at work excavating the old asphalt and placing thick layers of laterite. There is quality work being driven according to specification.
“This is the first time we are laying a solid foundation for the take-off of Abia. Abia State is just taking off now in all aspect, education, commerce, infrastructure, name it. Governor Ikpeazu has laid foundation in every aspect of our political life,” intoned the Ngwa Road Monarch.

Coming immediately after the commissioning of Osusu Road, the solid work going on in Ngwa Road has suddenly raised the opinion poll for Governor Ikpeazu.” Today, those who were criticizing the Governor are now saying that he is the best thing to happen to Abia, that he should stay beyond 2023,” the monarch continued. “Now, I use to remind them of their words. They have swallowed their words.

Indeed, the narrative has changed and the commentaries have changed. Governor Ikpeazu has suddenly become the Tom-boy of the Aba people. His capacity to conquer the intractable infrastructure quagmire of Aba has swung the polls and there is a widespread endorsement.

Ngwa Road is a boundary road that separate the Aba city from the natives. The place is Ndiegoro village. But, after annexing the land, the Whiteman moved the natives living in the city area to the Ndiegoro village areas and nearby villages like Akoli, Iheorji, Umuogele, Umuagbai and Amaufuru. But, Ndiegoro (Ngwa Road) is the first village. “That was how the area became a Centre of the highest population and highest concentration of people in the whole of Aba South. It later witnessed a large influx of many low income groups from all over Igbo land including Calaba people. That was why the area was called Ama Nmou(Calaba Compound), ” disclosed Eze Emejiaka.

Indeed, when I visited Ngwa Road for two days this week, I did not see the old whores of fairy tales. I saw traders and buyers struggling for space on the abandoned road. Then, it was good to be part of the men at work, to be part of the new social transformation. I joined men in the work of the re-engineering of the old city. We moved the cement cast as it cascaded from the roller into the wooden casement. Governor Ikpeazu is sweeping the streets of Aba and creating a new world order.

By the time he is done, Ngwa Road, I’m sure, will become another wonder of the Ikpeazu administration.

Men are at Work.