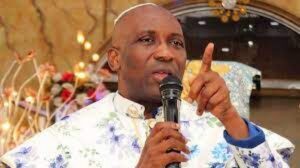 Speaking on Ubah’s chances in his latest predictions on the hotly contested election, Primate Ayodele said that “victory is surrounding him.”

Warning the billionaire oil magnate to avoid being rigged out “technically”, he urged Ubah to avoid any missteps in order to “take victory.”

He said that Ubah, whose rags-to-riches story is regarded as the best reflection of the ‘Nigerian Dream, has what it takes to emerge victorious, adding that, “victory is close to him.”

Primate Ayodele had in his latest prophecies dismissed the chances of both the ruling All Progressives Grand Alliance (APGA) and All Progressives Congress (APC), saying: “Nobody is ready for APGA and APC in Anambra State but both parties are bent on taking it by force.”

Primate Ayodele said the PDP candidate, Mr. Valentine Ozigbo can only win the election if he goes into a “coalition” with others.

Primate Ayodele had in his first prophecies on the forthcoming election at a media parley to unveil the 2021 edition of his award-winning book, ‘Warning To The Nations’, predicted an Ifeanyi Ubah victory if the crises in APGA persists.

Primate Ayodele has been publishing “Warnings to the Nation” since 1994.