According to her, Fani-Kayode never consummated his six-year relationship with her because of his alleged challenge. 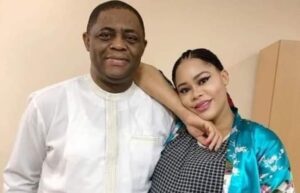 According to her, Fani-Kayode never consummated his six-year relationship with her because of his alleged challenge.

Miss Chikwendu said the four children she had with Fani-Kayode were conceived via artificial insemination.

She, therefore, prayed the court to declare that she was never married to Fani-Kayode.

Like she has done several times, Chikwendu accused Fani-Kayode of assaulting her while they were married, adding that the former minister lied to her that his marriage to his third wife had ended.

The petitioner, Chikwendu stated this in her November 29, 2021 “Application for issuance of civil summons/plaint” against Fani-Kayode, the respondent.

She is seeking the following reliefs:
“An order declaring that there was no customary marriage between the petitioner and the respondent (despite their six-year cohabitation) under the Nanka, Orumba North, Anambra State of Igbo native law and customs.

“Alternatively, assuming by the evidence during the trial the court finds that there was a customary marriage between parties:

“An order dissolving the customary marriage between the petitioner and the respondent forthwith.

“An order granting the petitioner access to and custody of the four children of the cohabitation between parties especially during their academic calendar.

“An order ordering the respondent to be continuously responsible for the academic, medical, clothing and welfare of the four children of the cohabitation.