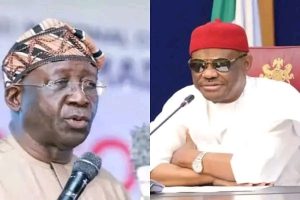 Ayu spoke at the Abuja national secretariat of the PDP shortly after he attended a meeting of the party’s Board of Trustees (BoT).

Rivers Governor, Nyesom Wike, has accused Ayu of taking the said N1 billion from an unnamed aspirant shortly before the PDP presidential primaries.

The Governor further accused the PDP chairman of collecting N100 million twice for the renovation of a new office for Peoples Democratic Institute (PDI), a research outfit of the PDP on Friday.

According to the Governor, Ayu collected the first N100m from an unnamed PDP Governor and still collected another N100 million from the PDP National Working Committee (NWC) for the same purpose.

But responding to the Rivers Governor’s accusations for the first time, Ayu said the N1 billion was a proposed bank loan proposal that the party wanted to take from a friendly commercial bank.

He however said the party dropped the idea after due consultations.

On the N100 million, Ayu admitted that a PDP Governor actually made the donation to the party for the purpose of renovating the NDI office accommodation.

According to him, the donation was used for the purpose for which it was given and the party did not even exhaust the entire fund on the renovation exercise.

The party chair however denied collecting another N100 million from the NWC for the same purpose, saying that the Rivers’ Governor’s claim was not true.