Obiakwa said he had called the mother of the accused person, who told him she was on her way to Uyo, where her daughter is being detained. 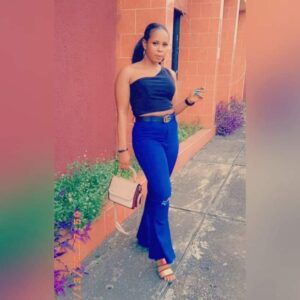 Henry Obiakwa, a man who claims to be the boyfriend of Princess Odume, the corps member who allegedly killed a young man in Akwa Ibom on Sunday with a machete, has said she is not capable of committing such a crime.

Odume was stripped naked and beaten after she was allegedly apprehended for killing the deceased. The police later arrived at the scene and took her to the station.

In an interview with SaharaReporters on Monday, Obiakwa said he did not think Odume was capable of committing the offence.

Obiakwa said he had been in a relationship with Odume for over a year though he added that the relationship was shaky because of the long distance between them.

According to Obiakwa, Odume is a very peaceful woman who is not violent. He said when she is angry, she keeps quiet.

He said, “We started dating two years ago. Though I live far away and you know how long-distance relationships can be. I came back last October for a traditional wedding which I invited her to attend with me and she came. We never broke up just that the relationship is no longer how it is supposed to be.

“Since I have known her, she has never been a violent person. Whenever she is angry, all she does is to keep quiet. I don’t think she can kill someone except she says it herself.

Obiakwa also said he lives in Lagos, while Odume who was living in Enugu with her family, was recently posted to Uyo, Akwa Ibom State for her one-year mandatory National Youth Service Corps programme.

When asked if she ever told him of any threat to her life by anyone, Obiakwa said there was nothing of such.

“She never told me anything about this other guy though I spoke with her four days ago before I travelled to Ondo where I get my wares from. She also never told me of any threat to her life,” he said.

Obiakwa said he had called the mother of the accused person, who told him she was on her way to Uyo, where her daughter is being detained.

Also speaking, Emilia Sophia, a friend of Odume, said she believed her friend was being set up and that she could never kill anyone.

“She’s my very good friend and I strongly believe that she can’t do something like that. I believe they set her up, she can’t be so heartless to slaughter someone like that,” she said.

When asked if Odume had told her about any threat to her life, Sophie said Odume had posted something similar on Facebook though she (Sophie) never got the details.

“Yes, she actually said someone was trying to kill her. I tried to find out what happened from her but she told me that the problem had been solved. I didn’t know how serious she was then,” she said.

Sophia also confirmed that she only knew Obiakwa as Odume’s boyfriend, adding that she did not know the relationship her friend had with the young man who was murdered.