Deputy Commissioner of Police, Abba Kyari, may have come under pressure to voluntarily resign from the service of the Nigeria Police as the Special Investigation Panel appointed by the Inspector-General of Police, Usman Baba, to review the allegations against the former Head, Intelligence Response Team submitted its report to the IG. A reliable source close to DCP Abba Kyari disclosed that the officer is considering resigning his appointment from the police following the allegations against him in the Hushpuppi case in the US. 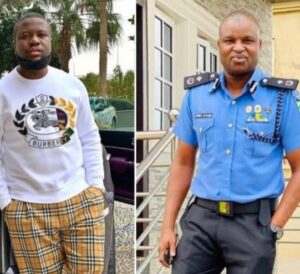 Meanwhile, DCP Abba Kyari has been on suspension since the investigation commenced.

The four-man investigation team, headed by the Deputy Inspector-General of Police in charge of the Force Criminal Investigations Department, Joseph Egbunike, submitted its findings on Monday to the IG.

The US FBI had in a report alleged that Kyari was induced by Hushpuppi to detain Chibuzor for one month when Chibuzor threatened to expose the defrauding of an investor in Quatar by Hushpuppi and his co-conspirators of over $1 million.

Kyari was then being investigated on the order of the IGP for his alleged link in the $1.1 million Internet fraud perpetrated by an Instagram influencer, Abbas Ramon, popularly known as Hushpuppi, and four others who include AbdulRahman Juma (Abdul); Vincent Kelly Chibuzo (Kelly); Rukayat Motunrayo Fashola (Morayo); and Bolatito Agbabiaka (Bolamide). Hushpuppy has admitted guilt to the crime and is awaiting prison sentence in a US court.

The IG had on August 1, urged the Police Service Commission, to suspend DCP Abba Kyari with effect from July 31. The IG also replaced Kyari with Tunji Disu, as head of the IRT.

Meanwhile, details of the finding or report of the panel are being awaited.