The Nigerian human rights lawyer and 25 rights and intellectual groups that on Tuesday alleged the secret trial and execution of six Nigerian soldiers in the nation’s capital, Abuja, have dismissed the denial of their claims by the Nigerian Army. They, joined by three other rights groups, on Wednesday posed ‘13 key questions’ for the Nigerian Army to answer, insisting that they had no reason to withdraw their claims. 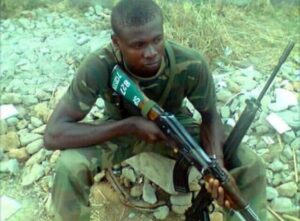 They said in a statement: “The Nigerian Army’s anonymous denial of its involvement with its immediate past Chief of Staff (COAS), Retired Lt Gen Tukur Yusuf Buratai in the secret and most horrendous execution of six Igbo Christian soldiers inside the Abacha Barracks in Abuja on Monday, 25th Jan 2021; is a clear case of ‘purposive admission of criminal responsibility’. If it is in criminal court trial, it becomes ‘mens rea proven’.

We are boldly glad and happy that Barr E.R. Okoroafor, a member of the Coalition and originator of the information had in his phone interview with the Abuja Correspondent of the Int’l Center for Investigative Reporting (ICIR) on 2th February, 2021 insist that the six Igbo Christian soldiers were secretly tried and executed and challenged the Army to not only produce them alive, hale and hearty, but also tell Nigerians and the world what actually happened including where the Army kept them and why they were kept as well as whether they were tried in secret and condemned for secret execution.

“The Coalition makes bold to say that uploading montage pictures of the slain soldiers with “Fake News” written over same or hiring a consultancy firm to write a statement signed by “an anonymous senior Army officer” is in no way a credible and concrete reply and ordinarily should not be taken serious; but owing to psychological terrorization and chronic censorship which media practitioners in the country have undergone and are still undergoing, any crab from the Army or Government is now capable of making big headlines. That is to say that the Nigerian Army has not issued any concrete and provable denial statement as far as the Coalition is concerned.

As a matter of fact, the Nigerian Army has ended up indirectly admitting criminal responsibility in the matter. The Coalition also did not issue that aspect of the statement for Nigerian Army to accept or deny because falsehood, lying, cover-ups and evidence destruction have been its routine and modus since 2015.

“Even after massacring hundreds of defenseless Easterners in 2015 and 2016, the same Nigerian Army set up a kangaroo panel in 2017 and in the end claimed that “no single citizen was killed in the East”. Same Nigerian Army has kept mute over its abduction of over 400 Obigbo residents in Rivers State. This is despite concretely evidential court processes and decisions including the release of 145 of the abductees, secretly and inhumanly thrown into solitary captivity for more than three months or since 21st Oct and early Nov 2020. Till today, the Nigerian Army has refused to speak or release the remaining abductees unconditionally or remorsefully apologize to the victims and Nigerians and hold the perpetrators tightly accountable. On the other hand, the Army is hereby mockingly ‘commended’ for not declaring the names of the slain soldiers as “fake names”, “not belonging to Nigerian Army”; or declaring their pictures as having “originated from Congo DRC or Central African Republic or Burundi”.

“Contrary to Nigerian Army’s gross ignorant with regard to ‘secret trial or court martial’, this is when like in military setting, service personnel are accused with malicious or premeditated and hateful intents and arraigned in a trial with a predetermined outcome; during which all ingredients of fair hearing and trial are set aside or stifled-and these include: denying the accused access to defense lawyers of their choice, denying them access to their family members and physicians, conducting their trials outside official publicity and public knowledge, blocking or denying them right of appeal to Civil Courts (Court of Appeal and Supreme Court) and carrying out secret execution of the court-martial convicts outside the law including without recourse to Nigeria’s existing National Moratorium on Death Penalty.

“The Nigerian Army has not provided concrete answers to the following:

(1) Whether the six slain Igbo Christian soldiers and their names, religion and ethnicity exist in the Army or on its records,

(2) Whether the four pictures as produced belong to the ascribed serving personnel of the Nigerian Army,

(3) Whether they were made to undergo any form of trial within the Army,

(4) Whether they were tried in any manner with the stated allegations,

(5) Whether their trial, if true, was conducted in the presence of their family, legal and medical representatives including allowing them access to lawyers of their choice.

(7) Whether they were allowed to exercise their right of appeal to Court of Appeal and Supreme Court.

(8) Whether the Nigerian Army issued any public statement concerning their trial or notified their beloved ones and the public.

(9) If they were executed, whether it was done secretly or in the open and if in the open, whether their lawyers, physicians, faith priests and family members were present-these, if true, should have been attached with audio-visual evidence showing same

(10) Where the Nigerian Army and its immediate past COAS, Retired Lt Gen Tukur Buratai derived powers to order the execution, whether in secret or in the open, of soldiers including the six slain Igbo Christian soldiers (unjustly and wickedly convicted), convicted by Army Court Martial

(11) If they are still alive and detained as ‘death row inmates’, where they are being held, condition of their health and circumstances leading to their present fate

(12) Why the Nigerian Army failed to produce them publicly, if they are still alive, hale and hearty.

(13) Why Nigerian Army, in furtherance of the above, did not update Nigerians as per whether it has also secretly executed or still keeping alive another Igbo soldier convicted and sentenced to death by firing squad in Maiduguri, Borno State in Jan 2021, by name: Trooper Azunna Mmadubuchi.”

Wednesday’s statement was signed by the following: