Sylvester Oromoni, the father of 12-year-old boy, Junior, who dead after he was allegedly beaten by his fellow students in school, for refusing to join their cult, has opened up on what transpired. 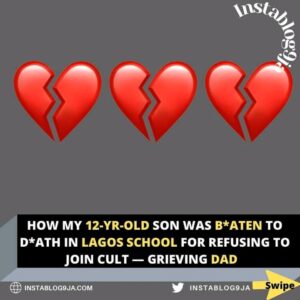 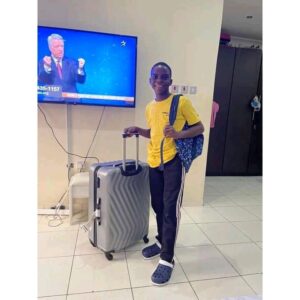 Speaking with TheCable Lifestyle, he said, “My son suffered. The boys they mentioned were also reported to the school last term when they bullied Junior and collected all his foodstuffs; clothes. I have two daughters, one of whom earlier graduated. I had to remove the second after this incident. They asked this boy to describe the sister’s privates and this got to us.”

He said Dowen had temporarily suspended the boys involved after the family’s eldest son took it up. He said Junior was also switched to a new hostel but the b*llying and intimidation persisted into the new term.

“They put fear in him so much so that, when you ask him, he might keep to himself and say, ‘they will kill me’. I considered removing him reconsidered since his sisters were still in the school.

The new incident came to my knowledge on November 21st after the school called my wife to notify us that our son was in the school clinic, injured. The boy couldn’t stand because his waist was bent and swollen along with one side of his belly. His mouth was black. He was taken to my house in Lagos but couldn’t sleep at night.

Junior said, ‘mummy, I didn’t play ball; I didn’t fall.’ He jumped off his hostel bed. They kicked him, matched his waist. Other students ran off. They thre*tened to kill them all if they spoke a word to the school staff. They warned Junior to say he sustained injuries while playing ball. They threatened him. If you ask the roommate, they’d all lie.”

The father said Junior s*ffered liver enlargement due to congealed blood. It was also claimed that Junior was fed a liquid substance described as “a chemical” for refusing to join the group.

“The parents of the boys are wealthy. They withdrew them. Some of the parents are planning to fly the children out of the country. The boys are five in number: four are in SS2 while one is in SS1,” he added.