Harvest of Tears as Family announces the demise of Rt. Hon. Ossy Prestige

The family of Late Rt. Hon.Ossy Prestige has announced the demise of the Honourable member Representing Aba North and South Federal Constituency in the Federal House of Representatives.

In the Press Release made available and signed by Rtn. Chukwu Nnanna brother of the deceased and the Director General Ossy Prestige Campaign Organization George Ezikpe Okiyi in the verified Facebook page of Rt.Hon. Ossy Prestige and monitored by Newsmirrorng crew. 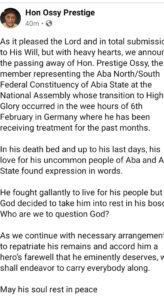 As it pleased the Lord and in total submission to His Will, but with heavy hearts, we announce the passing away of Hon. Prestige Ossy, the member representing the Aba North/South Federal Constituency of Abia State at the National Assembly whose transition to Higher Glory occurred in the wee hours of 6th February in Germany where he has been receiving treatment for the past months.

In his death bed and up to his last days, his love for his uncommon people of Aba and Abia State found expression in words.

He fought gallantly to live for his people but God decided to take him into rest in his bosom. Who are we to question God?

As we continue with necessary arrangements to repatriate his remains and accord him a hero’s farewell that he eminently deserves, we shall endeavor to carry everybody along.

May his soul rest in peace