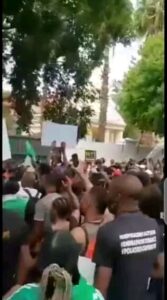 As you know that some people have been accusing Tinubu of having something to do with the deadly attack on protesters at Lekki Toll Gate Yesterday. He has denied this allegation and made it clear that he doesn’t have anything to do with the attack according to Daily Trust. Meanwhile, the video I would show you below shows peaceful protesters at Tinubu’s Residence as they kept singing “How many people soldier go kill, they go kill us tire”

The peaceful protesters kept chanting and singing that “how many of them would soldiers kill”, they kept going and said “they would kill them until they are tired”.