Presenting the appropriation bill christened “Budget of Economic Recovery Through Industrialization and Inclusive Growth” at the legislative chambers of the State House Assembly, the governor disclosed that recurrent expenditure is sixty-six billion, eight hundred and thirty million, one hundred and ninety-three thousand, two hundred naira only (66,830,193,200) representing 45% of the total expenditure and 6.29 percent increase from the 2021 budget while eighty billion, nine hundred and fifty-seven million, five hundred and eighty-eight thousand, one hundred naira (80,957,588,100) only, representing 55% is capital expenditure. The figure represents 15 percent increase over the 2021 budget. 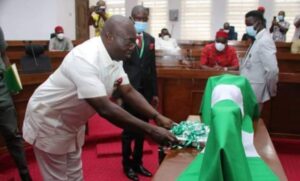 The Governor stated that the budget will provide opportunities to pursue recovery by redirecting resources to improve on the production chain in the State and improve the overall quality of products coming from Abia people. He added that the government also intends to recover on a stronger footing by supporting industrialization and inclusive growth.

The governor maintained that the government will also focus on safeguarding lives, jobs businesses and encourage the rapid increase in number and performance of micro small and medium enterprises and firms across all the nooks and crannies of Abia State.

The State chief executive said that government has outlined measures to be taken in pursuit of its intentions under the 2022 fiscal year including sustaining and improving on investments in education, healthcare and social welfare to ensure Abia residents are healthy, productive and competitive in line with the sustainable development goals.

See Also Hurrah! Men In Federal Civil Service Can Now Go On 14-Day Paternity Leave After Wife’s Delivery
According to him, other measures put in place to ensure success of the 2022-2024 multi year budget include to foster the security of lives and property by targeting the roots of intolerance, communal violence, crime and other potential sources of insecurity as well as promotion of good governance among others.

Ikpeazu commended the firm commitment of the 7th Abia State House of Assembly towards ensuring a harmonious and productive relationship with the executive, adding that the challenges ahead require collective work to enable government deliver on its promises and commitment and urged the House to ensure speedy passage of the budget.

See Also How Air Peace Pilot Averted Air Disaster, As Plane Suffered Bird Strike In Owerri Monday
In his response, the Speaker, Abia House of Assembly, Rt. Hon. Chinedum Orji commended the efforts of Governor Okezie Ikpeazu towards revitalizing the industrial hub of the State which has earned the State an award as the SME capital of Nigeria.

He said that the members of the 7th Abia House of Assembly have remained committed in churning out legislations with the over all aim of developing the State and promised to ensure prudence, transpancy and accountability in passing the budget into law within the shortest possible time.