Governor Okezie Ikpeazu has commissioned a civic centre, OVU UMULE built and handed over to the people of Umule Village in Osisioma LGA by their son and Chief Press Secretary to Abia State Governor, Sir. Onyebuchi Ememanka. 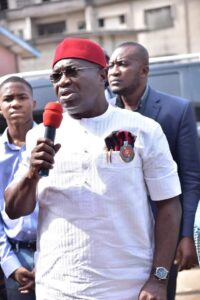 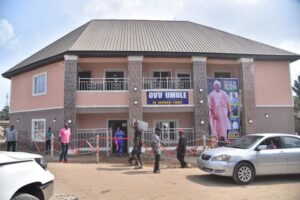 Speaking while commissioning the Civic Centre, Governor Ikpeazu congratulated his Chief Press Secretary and his wife, Lady Blessing Adaeze Ememanka for achieving the feat and building the project for their people which would serve both as a Community Hall and Health Centre
The Governor who commended Sir Ememanka for his resilience and capacity asserted that the edifice will stand as a monument to remind Ndi Umule of “their period” in government. 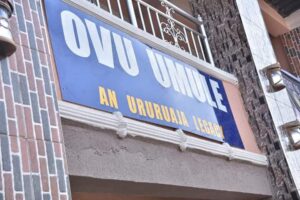 The Governor assured that the Abia State Government would equip the Health Centre with medical facilities while two indigenes of the Community who studied health related courses will be employed to work in the Health Centre.

Earlier, the donor and Chief Press Secretary to the Governor, Sir Onyebuchi Ememanka thanked Governor Okezie Ikpeazu for assisting him in ensuring that his dream of building a befitting civic centre for his community was realized.

He explained that the centre which is a storey building would serve two purposes, explaining that while the downstairs will serve as Community Hall and Community Health Centre the upstairs is the Godwin and Susan Ememanka Memorial Auditorium in honour of his late parents, who did not only give birth to them but trained them to be useful in the society.