The Governor of Abia State, Dr. Okezie Ikpeazu has sent a warm message of congratulations to a distinguished Abia son and renowned Catholic Archbishop, His Excellency, Most Rev. Fortunatus Nwachukwu on his latest appointment by Pope Francis as Permanent Observer of the Holy See to the United Nations Office and other Specialized Institutions in Geneva, as well as Permanent Observer to the World Trade Organization and the Representative of the Holy See to the International Migrations Organization. 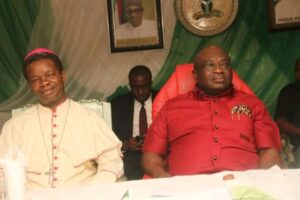 Most Rev Nwachukwu is currently the Papal Ambassador to the Caribbeans, having moved there from Nicaragua where he was Papal Ambassador and Dean of the Diplomatic Corps. He will take office at the United Nations in March 2022. 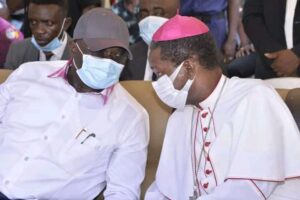 Governor Ikpeazu notes that the people of Abia State are proud that the sterling credentials of their son have yet again been recognized at the highest global diplomatic stage. 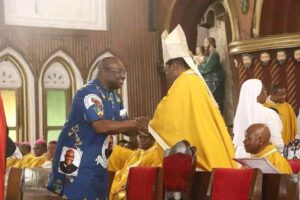 “From his ordination as a Catholic Priest at St. Eugene’s Aba in 1984 and his enrolment into the Vatican Diplomatic Service in 1994 till date” , Ikpeazu added, “Archbishop Nwachukwu has grown in stature onto the global stage holding very high and sensitive offices at the highest level in the global Catholic Church including Chief of Protocols at the Vatican as well as being appointed Titular Archbishop of Aquaviva by Pope Benedict the 16th. He has also served as a Vatican diplomat in several countries of the world”. 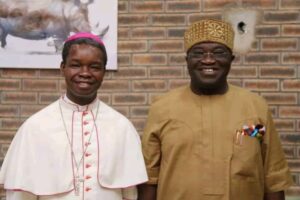 Governor Ikpeazu describes the new Vatican Ambassador to the United Nations as a great scholar who represents one of the finest intellectuals in the religious world and whose credentials speak volumes of his sagacity.
The Governor believes strongly that Archbishop Nwachukwu portrays the indomitable spirit of excellence of the average Abia citizen and a shining inspiration to young Abians.

“From his birth place in Ntigha in Isiala Ngwa North LGA and with no special background, Archbishop Nwachukwu’s story is one that will inspire young Abians that they can reach the zenith of their chosen careers and get to the highest level of the global stage with hardwork, determination and faith in God”. Ikpeazu added.

Governor Ikpeazu is confident that the Archbishop will bring to this present assignment, that high level of diligence, integrity and long years of diplomatic experience that have defined his career over the years. He assures the Archbishop of the continuous prayers of the people of Abia State in his current assignment.

The Governor, on behalf of the Government and People of Abia State, wishes the Archbishop the very best in his new assignment.