Governor Okezie Ikpeazu has said Federal Government is yet to pay any money to Abia State Government on works it carried out on federal roads in the state. 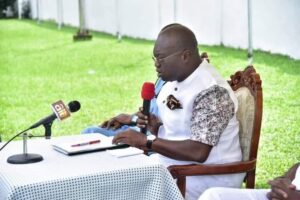 The governor said in Aba, yesterday, that despite that, his administration would continue to do work on federal roads to alleviate the sufferings of his people. 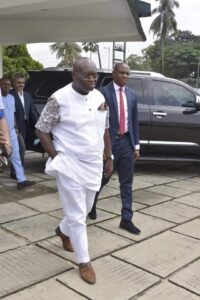 “Whether they refund us or not, we will continue to build these roads because they are used by our people and we won’t allow them to suffer. We have given the contractor N1 billion to give us asphalted one lane on Port Harcourt Road from end to end and before long, another lane will be ready, making it two, out of the six lanes the road will carry.”

He said his administration has built and commissioned 41 roads in Aba, out of which 95 percent of them are still standing because they were built with cement rigid technology.

The governor said 20 roads were ongoing in different parts of the commercial city.

“Nobody was paid N6 billion as being speculated for Faulks Road but we paid the contractor some money and work is still on going. It is only about 30 percent of the whole length of the road that is bad; the most important thing is that we have recovered Ukwu Mango portion of the road; the contractors are going back to site and before the end of January 2022, that road will be completed and commissioned.”

The governor said his administration was tackling five critical roads in the city which included Ngwa, Obiohia, Ohanku, Port Harcourt and Omuma Roads, which he said would be delivered before the end of the coming dry season.

Ikpeazu said his government’s efforts at rehabilitating the road road that leads to the NNPC Depot at Osisioma was thwarted by a contractor, who claimed he was given the contract by the federal ministry of works but was yet to commence work.

Ikpeazu promised that the contentious Osisioma Flyover would be completed and commissioned within the coming dry season.