General Overseer kidnaps himself for ransom.

Police, on June 18, arrested Pastor Richard On­yekachukwu who faked his own kidnap, and demanded N10 Million ransom from his family members. His wife and another pastor, Enoch, connived with him and played along. 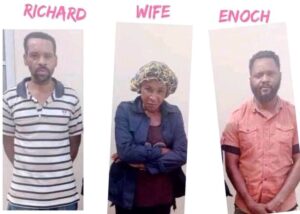 Pastor Onyedikachukwu confesses:
‘I am from Idemili South council area. I am the second child in a family of seven. I am a pastor and contractor. I live in Marawa, Nasarawa state.

‘I had a big church, but the roof was blown away by the wind. The name of my church is Resurrection Pow­er Church. I took some loans to assist the businesses that I was doing to support the min­istry. It was about N600,000:00.

‘I found myself in financial challenges, and paying the loan became difficult.

‘The banks were after me and I didn’t know what to do. I was thinking of getting money from my younger brother, Prosper, a rich civil servant, to offset the loan be­fore I was dragged to court. It wasn’t easy; that was why the thought of self-kidnap came to me.

‘I demanded N10million, and they bargained to N5 mil­lion and finally N2million. We were still waiting to hear from him when police arrested me at home..’