‘Focus on evacuating civilians because my mission in Ukraine will eventually be completed,’ Putin tells Macron 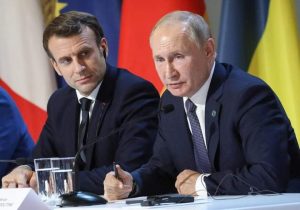 The tasks of Russia’s ‘special military operation’ in Ukraine would be fulfilled in any case, Putin reportedly told Macron.

The Russian president also urged his French counterpart to join efforts to ensure the safe evacuation of foreign citizens from Ukraine.

Putin reportedly explained that it was about demilitarisation and the neutral status of Ukraine, so that a threat to Russia would never come from its territory.

He said attempts to gain time by delaying negotiations would only lead to the emergence of new demands on Ukraine.

Putin complains about Ukraine’s move to join NATO, a military alliance to which Russia doesn’t belong. But critics accuse the Russian leader of trying to revive the former USSR of which Ukraine used to be part.