Obinze community, in Owerri West Local Government Area of Imo State, has been thrown into mourning after a family of 12 was found unconscious in their apartment. 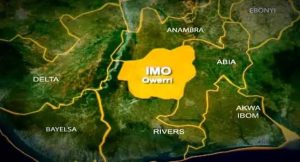 Five of the family of twelve have died from unconfirmed causes while seven others are reportedly still battling for their lives.

A community source told our reporters that other affected members of the family were rushed to the General hospital Umuguma in Owerri west council area.

”This morning five people were confirmed dead but the number of persons who died after can’t be ascertained for now as doctors are seriously attending to the unconscious ones in the hospital.

According to him,” it has to do with juju matter connected to a land dispute, mysterious deaths have been ravaging the Obokwu Obinze ever since a dangerous diety was brought into the family to establish a truth about a particular land matter but unfortunately, the diety later turned to kill the person that brought it and after which it attacked more households.”

The man, Kingsley Oguzie, a twin, a two-year-old child, a 12-year-old girl and another adult have been confirmed dead.

The source said others including the wife of the deceased are still very unconscious.

”Oguzie is not an official driver of the senatorial candidate of the Peoples Democratic Party in Owerri zone, Uche Onyeagucha but one of the acquaintances from Obokwu, the source said.