A fire outbreak has been recorded at the Central Bank of Nigeria’s Office in Gombe State on Friday.

The incident, sources have said, started at about 10am.

Details about the incident are still scantly at the time of filing this report but Scooper understands that fire incidents have become a staple across government properties especially Ministries, Departments and Agencies in recent times, with the last being an outbreak at the State House in Abuja, on Thursday, June 4.

According to Garba Shehu, Senior Special Assistant to the President on Media and Publicity, the fire was caused by an electrical spark that happened at the Presidential Villa.

He said: “The incident, linked to an electrical spark, was immediately brought under control by alert staff using available fire extinguishers well ahead of the arrival of the Federal Fire Service trucks stationed just outside the premises.”

“Luckily, no injury or serious damage was recorded,” the presidential spokesman added.

Scooper had also reported another fire that broke out at the headquarters of the Nigerian Postal Service (NIPOST) in Abuja.

The cause of the fire outbreak was not immediately known but it began around 9am on Wednesday, May 20.

Furthermore, recall that on Friday, April 17, 2020, a similar incident broke out at the headquarters of the Nigeria’s electoral commission, INEC, in Abuja. 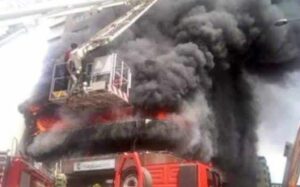 That incident came only two days after headquarters of the Federal Corporate Affairs Commission (CAC) in Abuja was also  gutted by fire and a week after a similar incident bedevilled the Nigerian Treasury House which houses office of the Accountant-General of the Federation.