Fight to the finish as Tonto Dikeh, Bobrisky wash dirty linen in public

Controversial Nigerian crossdresser, Idris Okuneye is popularly known as Bobrisky and his best friend, Tonto Dikeh were widely known as the proverbial “birds of the same feathers that flock together.” But this can’t be said of the two besties in recent times, as they are currently on each other’s throats. 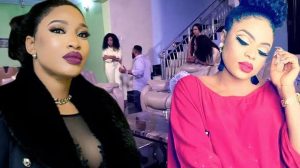 Before their relationship turned sour, the controversial figures were once like inseparable Siamese twins, who had a lot in common. 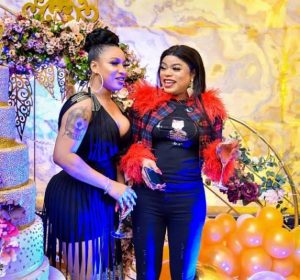 At some point, tongues started wagging that they were dating, even as Tonto Dikeh would do everything to defend and honour her bestie. Their love for each other was so strong that they embarked on a trip to Dubai together to have a good time.

But unfortunately, that Dubai trip turned out to be the reason for their sour relationship today. Upon their return to the country after Tonto Dikeh’s arrest and release in Dubai which went viral, things have never been the same for the two friends.

The besties have been attacking, each other on Instagram at the slightest provocation since 2020, and the war of words has continued unabated.

The latest punch came from the socialite, who slammed his ex-best friend recently for being ungrateful for all his help and friendship.

Unable to let go of his soured relationship with the actress, Bobrisky recounted how far he went to help Tonto Dikeh when she was arrested for alleged possession of weed in Dubai.

In an Instagram post, Bobrisky said: “We stopped talking in 2020. Fast forward to your arrest in Dubai Tonto. You insulted the Dubai police because you were drunk and high. I tried my best to control you back then and I couldn’t. Dubai police locked you up for two days in their cell, nobody knew where you were locked up. I was busy crying, calling people I knew in Dubai to look for where you were locked up.

“After two days, you were released and the police collected your phone and weed they caught you with and charged you to court. I removed my SIM card and gave you my phone just to make sure you quickly post some pictures on your page so that Stella and other blogs won’t laugh at us.

“I paid for our hotel bills and feeding. We were stuck in Dubai for three months and with all your bragging, you had no one to save you. Even your so-called boyfriends then stopped picking up your calls because you were giving them so much headache, I was the only soul who stood by you…”

Responding in an Instagram live chat with media personality, Daddy Freeze, Tonto Dikeh blasted the crossdresser, explaining how disgusted she felt whenever she had a misunderstanding with Bobrisky.

According to her, talking about Bob or fighting him was like physically rolling in the mud.

“I actually really don’t want to talk about him. You know we actually had a conversation on this and every time I do that, I physically feel dirty. I hate myself for a few seconds but it’s necessary. Where is the fun in that if I don’t drag him a little bit but I don’t really care about him,” the actress said?

She said that unlike her, Bobrisky has refused to move on from their bitter friendship and used every opportunity to slander her.

“I’m the kind of person that when I’m done with you, I want to be done with you. I have a mental burial in my head, a funeral for you in my head. Bob is gone and forgotten. You will never see me talk about him on social media or among my friends. But this guy will always jump at issues that have to do with me. I put so much into anything I am involved in.

“Anything about him irritates me. If I dump you, you stay there. It’s embarrassing that Bob has a problem with money and abandonment issues.

“Since his mother left him while he was young, it has been horrible for this boy to hold a relationship with anybody that wants to play a mother figure role for him. I feel so sorry for him.

“When you realize that this guy isn’t worth being in your life, it becomes a major issue. I can remember when he was begging me about a year ago.

“He needs help and I am done with him. I used to be the one helping him out. All I’m asking is that if I am done with you, please grow up and leave me alone.”

“Why do you love me so much? What’s this obsession? Everybody in your life owes money. What do you have, because you made a little money while we were in Dubai, and I gave you back your money? But you refused to collect the money. I have paid you threefold,” Tonto Dikeh snapped, calling Bobrisky a man.

The two best friends have been fighting each other since 2020 when Bobrisky blocked the actress on Instagram for unfollowing him. This action led to a strain on their soaring friendship, which lasted six years.

Bobrisky accused Tonto of living a fake life and owing to him N5 million. He later shared a post on his Instagram page begging Tonto to forgive him for calling her out on social media.

The cross-dresser urged the mother of one to forgive him, promising never to do such again.

But his apologies fell on deaf ears as Tonto Dikeh never gave him another chance since then.

They were last sighted together in public during their Dubai getaway in November 2019.