A female undergraduate has reportedly fainted after she received the news of the death of one of her lecturers. 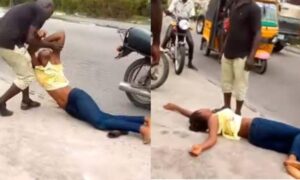 According to a twitter user, @Spend0Gustav0, who shared the story, the unnamed female student fainted thrice on hearing the sad news of her lecturer’s death, who allegedly died of Acquired Immune Deficiency Syndrome (AIDS).

No reason was given as to why she fainted, but according to those, who took to the comment section of the tweet, they made some assumptions.

Most assumed that there is a tendency that she had an amorous affair with the deceased and they might had unprotected intercourse, while he was alive.

“My female coursemate fainted 3 times after she heard the news that our lecturer died of AIDs. I no understand why she faint” 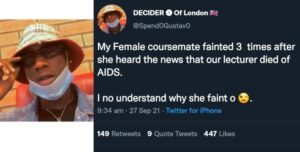