A Federal High Court sitting in Umuahia today, dismissed the suit seeking to nullify the Abia PDP primaries and thereby disqualify all PDP candidates for the 2023 election on the grounds that the congresses conducted by the PDP to elect delegates for the primary election that produced the candidates did not hold. 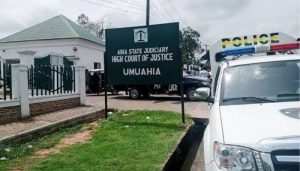 The plaintiffs, had among other prayers, asked the court to sack all the Abia PDP candidates because the three-man delegates election which produced them never held.

According to Justice Anyadike, the suit can only be justiciable in the court if it were brought by an aspirant who participated in a primary election. The court subsequently dismissed the suit after resolving it in favour of the defendants, declaring that the plaintiffs lacked locus to sue.

This judgement is not only a victory to the candidates and the PDP but also the victory for democracy, justice and Abians in general.

The plaintiffs had by that singular suit, in a grand conspiracy hatched by enemies of the State, the PDP and the people it serves, sought to embarras the Party and disqualify the most credible governorship candidate in the race and other candidates of the PDP at all levels and enthrone mediocres for their selfish ends.

In a press release signed by Hon. Elder Abraham Amah, Abia PDP Vice Chairman/Acting State Publicity Secretary says, the judgement has again, as usual, deepened the belief of all peace-loving and fair-minded people that the judiciary remains the last hope of the common man.

As we savour the victory of this landmark judgement in our journey to victory at the polls, we call on all PDP faithful to remain steadfast and resolute in their determination to enthrone good governance, accountability and transparency in government by ensuring that we do all we can to secure the victory of the PDP at all levels the polls.

To our compatriots who lost at the court, we enjoin them to be magnanimous in their loss as we are in our victory as we use this opportunity to extend our clean hands of fellowship to them and ask them to join us in building an Abia that all of us would be proud of.