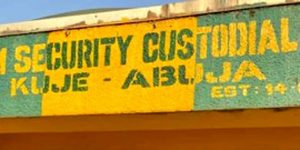 It’s unclear where the attack happened as details of the incident were sketchy at the time of this report.

Social media reports cliamed it was an attack on Kuje Prison by suspected terroirsts.

Residents said that sounds of gunshots were first heard around 10pm.

On Social Media, Twitter users commented on the incident, with some advising resident of an estate close to the prison to stay indoors.

Multiple attempts to reach prison authorities did not yield results. The spokesperson for the Nigerian Correctional Service, Umar Abubakar, was unreachable.