Reports has it that Nigerian International internet fraudster, Ramoni Abass alias Huhspuppi, once sold second-hand clothes on the streets of Lagos State. 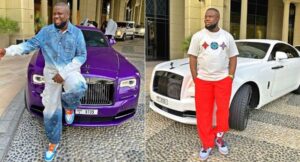 Part of the report by his investigators read,

“ Mr. Abbas started out as a secondhand-clothes trader in Lagos before claiming to be a billionaire property developer in Dubai_ .”

He says he posts about his luxury life to inspire others to make more of their lives.

‘ I post a few of these things so that someone can see my page someday and decide not to give up,’ he once told his 2.4 million followers on Instagram.

There were also reports by some of his old friends that his father was a taxi driver in Nigeria. 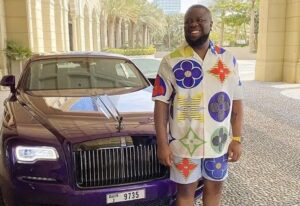 Hushpuppi was arrested in Dubai last month for allegedly diverting over half a billion dollars from private accounts through a series of fraudulent activities.

The alleged fraudster, who boasts of over 2.4 million followers on social media, was known to always put his ostentatious lifestyle on display.

Huhspuppi boasts of many luxury cars including two Rolls Royce, a Maybach, a Bentley, a Ferarri, Mercedes G Wagon and many more.

He used strictly private jets for international travel where he videos himself consuming expensive champagne and food.

The suspect usually puts inspirational captions beneath his posts in a bid to “encourage hard work among youths.”

Little is known of his personal life but he admitted to fathering a child in 2013 who he said he would like to set up an account for “in case anything happened to me tomorrow.”