A former Director-General of the Progressive Governors Forum (PGF), Dr. Salihu Lukman has alleged that Governor Yahaya Bello of Kogi, Hope Uzodinma of Imo State, Dapo Abiodun of Ogun State, are working with the Chairman of the Caretaker/Extraordinary Convention Planning Committee (CECPC), Mai Mala Buni to undermine the March 26 national convention of the party. 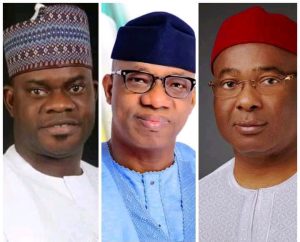 Lukman, who made this known in a statement he issued on Friday said whether APC would produce both party leaders and candidates for the 2023 elections, who can justify the trust invested in them, depends on how all the current leadership challenges facing the party are resolved.

Lukman stressed that anyone who loves Buni should be more worried about protecting his honour as a political leader by ensuring that he doesn’t become a letdown who stands opposed to the majority decisions of party leaders and members.

He noted that if Buni shares the vision of all the founding leaders of the party of making the APC truly democratic and progressive, it is expected that he would be willing to make every personal sacrifice to demonstrate his support for the decisions of the party

He wrote, “There are known collaborators of His Excellency Mai Mala who have colluded with him to ensure that all attempts to organise the APC National Convention are blocked.

“Three Governors who are known and must also be called upon to account for their roles in undermining decisions to organise the APC National Convention are His Excellency Yahaya Bello of Kogi State, His Excellency Hope Uzodinma of Imo State and His Excellency Dapo Abiodun of Ogun State.

“There are other party leaders, including Sen Uzo Kalu who have actively supported His Excellency Mai Mala to undermine the decision to organise the National Convention of the party.”

Lukman stressed that the National Executive Committee (NEC) meeting scheduled for March 17 should initiate processes of a disciplinary hearing in line with provisions of the APC Constitution to sanction all these leaders if found guilty.