• *Poverty, drugs pushed me into this • She comes from a broken home •Has not been seen on campus since COVID-19 lockdown • Shocked father, neighbours, course-mates, say she’s too innocent to kill someone • Regrets her action, warn other girls to learn from her mistakes* 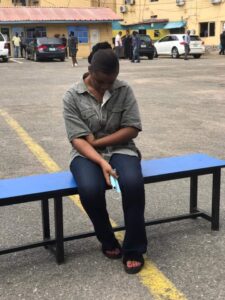 Chidinma Adaora Ojukwu, the 21-year-old girl and 300-level student of Mass Communication, University of Lagos, suspected of murdering Usifo Ataga, Chief Executive Officer, SuperTV, has, in an exclusive interview with Saturday Sun, opened up on her life trajectory that led into the heinous crime.

Ojukwu who spoke to our reporters at the State Criminal Investigation Department, Panti, Lagos, where she is currently being held pending the conclusion of investigation into the alleged murder and her formal charge to court, revealed, not only how she dropped out of school because of poverty but also the fact that she comes from a broken home. Asked about her mum, she said:

“My dad raised me. I don’t have contact with my mom. We don’t talk. I have an older sister and a younger sister.”

Other things she told Saturday Sun include how she went into the life of drugs. Her fellow students who spoke to our paper expressed shock over her involvement with the cold-blooded murder of the TV entrepreneur. But the girl who regrets her action advises other ambitious girls to learn from her mistake.

When the suspect was interviewed, she revealed that the last time she visited campus was before the coronavirus pandemic lockdown. As she explained, this was because there was no money for her to go back to school to continue her education pursuit.

She was also asked what the so-called “Roofies” was. She had taken the substance, along with Ataga, and that spiked up the man’s libido and made him to start pursuing her all over the place, including around the kitchen cabinet and demanding for another round of sex, even when she was too tired to engage in such act. She revealed that it is a street lingo for Rophynol. She confessed that she started taking drugs at a party she attended one year ago. “The first time I took it, I wasn’t myself. But I continued taking it because my body later got used to it. It makes me feel high”, she added.

Asked what the drug Rohypnol is used for, she said that it makes one feels high so much “you can do things you have never done before.”

During her confession, Chidinma alleged that the deceased gave her Roofies about an hour before the unfortunate incident. Experts contacted by Saturday Sun confirm that roofies is a street name for Rohypnol. It is also known as “Forget-me pill,” “Mexican Valium” and date rape drug.

But as a tranquilizer, it is about ten times more potent than Valium. The drug is available as a white or olive-green pill and is usually sold in the manufacturer’s bubble packaging. Users crush the pills and snort the powder, sprinkle it on marijuana and smoke it, dissolve it in a drink or inject it.

Rohypnol, they say, has been used to commit sexual assaults because it renders the victim incapable of resisting, giving it the reputation of a “date-rape” drug. Its users often describe its effects as “paralyzing.” The effect starts 20 to 30 minutes after taking the drug and peaks within two hours. But it may persist for eight or even 12 hours. A person can be so incapacitated (made unable to act), that they collapse. They lie on the floor, eyes open, able to observe events but completely unable to move. Afterwards, memory is impaired and they cannot recall any of the things that happened. The person may experience loss of muscle control, confusion, drowsiness and amnesia. The drug is sold in Europe and Latin America as a sleeping pill, but it is illegal in the United States and Nigeria.

*The real me*
–Chidinma

But the suspect, who looked sober, also took the opportunity to talk about herself when she is not under the influence of drugs. She described herself as an introvert who goes to clubs to unwind once in a while. She was raised in Ilasa, Lagos by her uncle and aunty, she said. She attended Government Primary School.

Chidinma revealed that her dad is an accountant while her mom is a trader. Her parents are not together, she informed our reporters. They have been separated for a long time. Looking downcast, she talks about deeply regretting her action. She said that she wouldn’t have done what she did if she had the opportunity to go back in time.

She advised young girls to face their education and try to live a good and modest life so that they don’t end up with the wrong crowd like she did. Questioned further on her love life, she said she doesn’t have a boyfriend and remarked that right now she is afraid of her future, given the consequence of her action in the face of the law.

The mood in her neighboourhood and department

When our reporters visited her neighborhood at Alagomeji, Yaba, Lagos, where she lives with her father, they found everywhere quiet and seemingly deserted. Some of the neighbours who spoke to them stated that they were shocked to learn about her involvement with the alleged murder of the TV boss.

At the Mass Communication Department, University of Lagos, where she is a 300 level student, some students were seen going about their lectures while others were seen sitting in groups and discussing the development in hush tones.

One of her course-mates who identified herself as Anita told Saturday Sun how shocked she was to learn that the innocent-looking girl she described as “cool and soft-spoken” is now being linked with the murder of someone. She said although the accused has admitted committing the crime, she is still finding it difficult to believe that she did it, given all that she knows about her.

Anita’s words: “We don’t talk much. We just say hi to each other whenever we meet in the department. She is so gentle and doesn’t seem capable of hurting a fly. She doesn’t interact with many people because she keeps to herself a lot.”

A young man who identified himself as Godwin Udoh also said that the alleged action of Chidinma who he said has not been to class for some time came as a big shock to him. “When I read the story, I couldn’t believe that a soft-spoken, gentle and shy girl like Chidinma could kill a man stronger than she is,” he said. “I just think she’s not telling the whole truth.”

Her father is also shocked, Saturday Sun learnt. According to a police source, when detectives arrived his residence to arrest her, her father, believing that someone somewhere was either trying to frame her innocent daughter for murder that it might be a case of mistaken identity, tried to stop them from carrying out their duty. He put up stiff resistance. But somehow the operatives overpowered him and later had him arrested and taken into custody for trying to obstruct justice. But he has since been released.