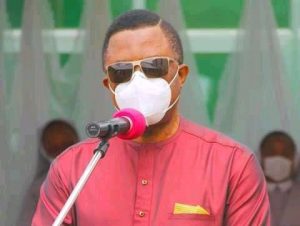 Mr Obiano, who contested and won the state’s governorship election in November 2013 and 2017 on the platform of the All Progressives Grand Alliance, withdrew N500 million at eight different times on March 29, 2017, bank records showed.

It is unclear how the funds were utilised. But the commissioner for information Don Adinuba described the record as “ridiculous” despite bank documents showing the governor withdrew the funds.

“I had not joined the government by the time in question,” he noted, adding that “the document you are referring to doesn’t appear genuine. The figures you quote look extremely ridiculous. N4bn withdrawn in one day? Simply an unintelligent allegation.”

In the past years, there have been allegations of misappropriation of security votes by public officeholders under the guise of enhancing the security of lives and properties.

Security votes are monthly funds allocated to each state for the sole aim of funding security services. The allocations, however, differ depending on the level of insecurity in each state.

A 2018 report by Transparency International in collaboration with the Civil Society Legislative Advocacy Center (CISLAC) described the security vote as ” one of the most durable forms of corruption in Nigeria.”

Their estimates established that the security vote in Nigeria totalled around $670 million annually and argued that the misappropriation of funds further heightens insecurity.

“The security vote is one of the most durable forms of corruption operating in Nigeria today. Yet instead of addressing its many urgent threats, the ever-increasing use of security votes is providing corrupt officials with an easy-to-use and entirely hidden slush fund,” Katherine Dixon, Director of Transparency International Defence & Security, said in the report.

In a Freedom of Information (FoI) request sent to President Muhammadu Buhari in December 2020, the Socio-Economic Rights and Accountability Project (SERAP) asked all states of the federation to disclose details of their proposed “security votes” spending in the 2021 appropriation bills.

“The time has come to demonstrate transparency and accountability in the spending of public funds meant to secure life and property,” SERAP had said in reaction to the abduction of over 300 students in Kankara, Katsina state, and security challenges across the country.

Heightened insecurity in the southeastern state

In recent times, Anambra has witnessed heightened insecurity ranging from incessant killings of citizens, including politicians and security personnel in the state, kidnapping, breakdown of law and order as well as destruction of public facilities, some of which are allegedly fuelled by the agitations of the Indigenous People of Biafra (IPOB).

As a result of the insecurity challenges ravaging the state, Mr Obiano has in the past months come under criticism over allegations that he does not appropriately utilise the funds received monthly to curb the spate of insecurity. According to Business Day’s report published in August, Anambra receives N850 monthly (N10 billion annually).

Before the state’s recent governorship election on November 6, the Attorney General of the Federation, Abubakar Malami, had threatened that Mr Buhari’s regime would declare a state of emergency due to insecurity across the state.

Reacting, Mr Obiano described Mr Malami’s statement as “unfortunate”, noting that Anambra has been the safest in the past seven years. “Well, that’s a very unfortunate comment by the Attorney-General, Malami – very, very unfortunate,” he had said.

The governor had appointed James Nwafor, a retired police officer and a major culprit in the atrocities committed by the Special Anti-Robbery Squad (SARS) in the Awkuzu area of the state, as his senior special assistant on security.

Following the #EndSARS protest that rocked major cities in Nigeria, Mr Nwafor was indicted as a perpetrator in major petitions submitted. This led to his dismissal as the governor’s aide in 2020.

EFCC places Obiano on a watchlist

In a letter to the Comptroller General of the Nigerian Immigration Service on November 15, 2021, the anti-graft agency placed the governor on a watchlist.

Although the EFCC did not disclose its basis for placing Mr Obiano on a watchlist and requesting that the NIS inform it whenever the governor intends to jet out of the country, reports said it was over corruption allegations.

Also, there are reports that Mr Obiano intends to relocate to a foreign country upon handing over to his successor, Charles Soludo, on March 16, 2022.

Rising in the governor’s defence, Mr Adinuba, in a statement, said, “Governor Obiano is out of the country currently. And he travelled through one of the country’s international airports. He did not disguise himself but rather left the country with his identity fully disclosed at the necessary immigration point.”

He added, “The EFCC sounded more inelegant when it claimed in the sponsored press report that it received intelligence reports that the governor plans to ‘flee’ from Nigeria once he hands over power next March 17 to the newly elected Anambra State governor, Prof Charles Chukwuma Soludo.”

While there have been controversies surrounding how much was handed over to Mr Obiano’s administration by former Governor Peter Obi, the secretary to Anambra State Government, Solo Chukwulobelu claimed that the incumbent governor inherited N9 billion cash and N26 billion near-cash from the previous one.

Valentine Obienyem, an aide to Mr Obi, disclosed that the former governor handed over N75 billion in cash and investment to Mr Obiano.

According to the data on DMO’s website, the state owed N3.026 billion in domestic debt and a total sum of $30.324 million in external debt under Mr Obi’s administration.