History was made on the 28th of October 2021 as the former Chairman Abia State council of traditional rulers and current South East representative in Nigeria Council of traditional leaders, His Eminence Eze Eberechi Dick. conferred on Hon Obinna Eze Oriaku the Ekwe Dike Ekwuo la Ngwa land 1 in his Palace at Mgboko. 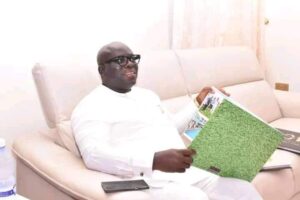 The event witnessed the presence of the Abia state Governor and his Deputy, represented by Bar Bob Ogu the honorable Commissioner for works and Chief Don Ubani the Deputy Chief of Staff respectively.

Hon Oriaku who was represented at the event by Chief Dan Silas appreciated His Eminence Eze Eberechi Dick for finding him worthy of such honor especially the title of Ekwe Dike Ewuola of Ngwa land .He pledged to continue to be a pathfinder in the renaissance of Abia of our dream. 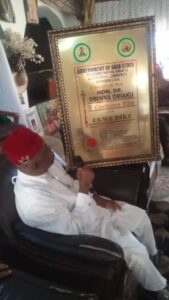 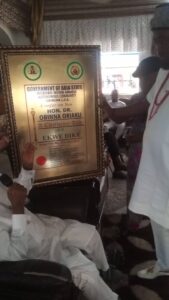 The Governor of Kano Alhaji Ganduje and the Chancellor of Gregory University Prof Gregory Ibe were equally conferred with different Chieftaincy titles.

Recall that Obinna Oriaku, a seasoned banker, was a former Commissioner of Finance in Abia state and a chieftain of APC. The Chieftaincy Conferrment from highly revered traditional rulers have validated the forthrightness in Oriaku’s political interventions.