Gov. Ikpeazu’s manifesto tagged “MAKING ABIA THE PREMIER BUSINESS DESTINATION IN NIGERiIA, AND WEST AFRICA”, was anchored on the mission of “elevating the quality of life of Abians”, and vision of ” making Abia State the premier destination in Nigeria, West and Central Africa; for investors, shoppers, workers and tourists’’. The basic philosophy driving this objective was captured thus” As a natural progression, it is critical that over the next 5 to 10 years, we make the ‘leap’ to realize the potential in Abia State and enable it take its natural place as a key growth pillar for Nigeria in particular, and the entire West African sub region in general”. It is basic that a goal must be accompanied by objectives that would drive it to ensure that it is met. Thus, Gov. Ikpeazu proposed to leverage on areas where the state has comparative strength such as the people of Abia State whom he described as a vibrant people with enterprising spirit and diligence in labour. He promised to make them the core strength and pride of his administration, adding” we shall channel this resource by putting in place a competent leadership team of skilled and proven executors which will complement the energy of our population. We will also transform the businesses of our very enterprising and skilled populace to achieve scale and world class appeal. That way ‘made in Aba’ will become something to be proud of and not something shoddy; Aba made products in shoe/ leather, garments and other such sectors will be bought in global retail chains and markets. We will have wealthy Abians and residents out of these historical areas of strength. Young men and women will finish school and come to our industrial centres to make a good living knowing they will get their first car in record time”. 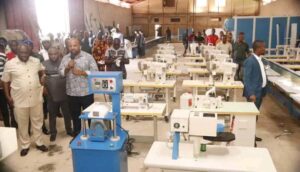 It is a matter of hours, Enyimba Automated Shoe Company, christened ENASCO will be commissioned. Expected to grace the occasion are high profile personalities such as the President of the Senate, Dr. Ahmed Lawan.ENASCO is a product of Gov. Okezie Ikpeazu’s untiring efforts to leave behind strong economic legacies. 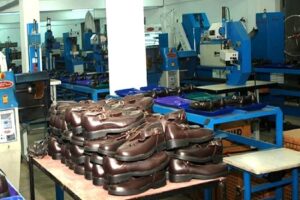 Gov. Ikpeazu during his campaigns promised Abia artisans a better deal and a departure from the past. The governor reinforced this promise when he met with Shoe, Bag, Belt and Trunk box Manufacturers Association of Abia state who paid him a courtesy visit at Government House, Umuahia. He stated his administration’s willingness to encourage and empower Aba shoe makers, bag and leather manufacturers to excel in their trade, adding that Abia is blessed in commerce with a lot of craftsmen and promised to give the association priority in his government’s scheme of things.

No doubt, Abia, especially Aba, has strength in artisanship, especially garment and leather works.Abia has comparative advantage in leather and garment cluster in Aba and sine the inception of Gov Okezie Ikpeazu’s administration, serious efforts have been deployed to tap into this area.The efforts have manifested in the formal inauguration of a 7-man Management Board for the Enyimba Automated Shoe Factory. Gov Ikpeazu while inaugurating the board charged the members to run the factory like a proper business and consolidate the position of Aba and Abia State as a global hub for shoe and other leather products as well bring to bare their wealth of experience in developing a brand that will compete favourably in the competitive global market. Ikpeazu added that the first ever Enyimba shoe factory is the sign post of a culmination of efforts to mainstream Abia in the competitive global shoe market.

According to the governor,”the whole objective is to lead out a paradigm shift in the old way of shoe production and key into the new dynamics of shoe production with acceptable global standards”.
The most cheering news is that all equipment in the factory are brand new and one of the best in the world, and the factory is expected to churn out close to 2 million pairs of shoes annually.

Also, in the past Gov. Ikpeazu have made consistent calls for the federal government to issue a directive to military and para- military outfits in the country to procure their wears from Aba where there is a ready market for the products.The governor while receiving a former minister from the state disclosed that garment makers and shoemakers in Aba have been equipped and are ready to kit the Nigerian military.He explained that what the state is requesting is for the federal government to make a pronouncement for the military and para-military organisations to procure their foot wears from Aba to encourage the manufacturers.
Indeed, the narrative of the Aba shoe maker has changed. Abia State Government in the recent past organized economic trips overseas.The state has also organised other courses where contingents to the trip visited several shoe factories overseas where they were exposed to different machines which are used in making shoes.

The essence of this exposure was to familiarize Aba shoe manufacturers with mechanized methods of manufacturing shoes which is vogue in other parts of the world. It was also to elevate their skill with training and exposure to modern technology to enhance capacity.The knowledge drawn from the overseas trips affected the productivity of shoe manufacturers in Ariaria. This exposure has spiked production of shoes.

At a point, Brazilian investors who visited the market were enthralled by what they saw.They bought pairs of shoes and wondered what the market would be when manufacturing process is fully mechanized.

Between the 80s and the early 90s, the Aba shoe industry witnessed an unprecedented boom. Aba shoes made in the popular Ariaria International Market captured the West African and Central African markets such as Togo and Cameroun. The centre of attraction then and the destination for the youths was Ariaria.The Aba shoe industry boom was cut short by the Ibrahim Badamosi Babangida’s regime when Nigeria became a dumping ground for all manner of imported goods, especially shoes. Thank God the old good days are here once again-courtesy of Gov. Okezie Ikpeazu’s stride to reinvent the Aba shoe industry.

Automation of the production processes is the way to go in the present technological realities. Like Professor Paul Kennedy captured in his book” Preparing for the Twenty- First Century”, ” Human history has always been shaped by the growth and migration of populations, by the opportunities and constraints provided by the environment, and by the rise of new technologies.

” The economic history of the world, and of humankind’s growing overall prosperity, flows from the invention of newer, improved ways of making things, from steam- driven textile production to computerised automobile design”.

Recently, Nigeria economy has not been in its best shape.To say that Nigeria economy is limping is an understatement. The economy is bleeding profusely. Most economies of the world are now looking inwards in the areas that they have comparative advantage, and Abia State is not in exception.Serious pressure is exerted on our currency (the naira) because of import dependency .This situation is necessitated by weak, narrow export base where revenues generated from oil and gas account for over 70 percent of our foreign exchange earnings.The time is ripe for us to encourage made in Nigeria goods. This effort if implemented will go along way in ameliorating the economic woes of the country by saving the nation the foreign currencies expended on importation of good and services( even those we have the capacity of producing).

On this note, there is a storng appeal for Nigerians to adjust their previous negative attitude to the patronage of made-in-Aba wears, especially shoes.This is emphasised by former Senate President, David Mark .Describing Aba as the” catalyst of industrial revolution in Nigeria’’, Mark said government should henceforth discourage importation of foreign goods because Nigeria has no business importing those goods which do not measure to the quality being produced in the country.

While commending the people of Aba for doing the nation proud through the spirit of enterprise and innovation demonstrated in quality products and goods made available through local skills, he said“We have no business importing military boots when what is produced here locally is more superior to that which is brought into the country.“We have no reason to import ballot boxes for INEC. This locally made ballotbox is actually better than the one INEC has been importing.

ENASCO is the way to go!