In a dramatic twist, the national leadership of the ruling All Progressives Congress (APC) on Saturday gave official recognition to a group working for the candidature of Vice President Yemi Osinbajo, to succeed President Muhammadu Bihari come 2023. 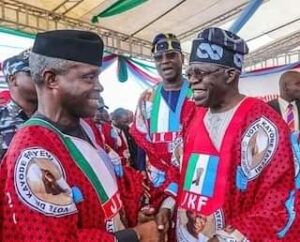 The VP’s supporters, under the name, Progressives Consolidation Group, have received approval of the APC leadership, through a letter by its caretaker chairman, Yobe State Governor Mai Mala Buni.

The endorsement was contained in the letter titled, “Letter of Recognition As A Support Group,” dated October 4, 2021, which was signed by the Director, Administration of the APC, Abubakar Suleiman, and made public in Abuja on Saturday.

The letter which was addressed to the PCG, read in part, “We write to inform you that the National Chairman, His Excellency, Mai Mala Buni has approved your recognition as a support group of the party.”

Addressing reporters as a result of the recognition, the head of the Progressive Civil Society Group, one of the sub-groups in the PCG, Mr. Bala Gide, explained that with this development, the PCG had been given the rare privilege of becoming the first to be so recognised.

“While we laud President Muhammadu Buhari’s forthright leadership and its populist direction which we expect an Osinbajo Presidency to energetically sustain after 2023, we also applaud the focused forthrightness of the APC leadership ably led by Governor Buni.

“We deeply appreciate the widening mobilization and deepening support that PCG and all associated groups working towards an Osinbajo Presidency; all our grassroots and national leaders, as well as current governors, federal and state lawmakers along with various labour and professional groups will have further significant roles to play post-2023.

The group appealed to the Vice President to yield to public demand by throwing his hat in the ring.

It promised that members would conduct themselves with decorum and respect all other aspirants who may wish to fly the APC flag in the presidential race.